Discover the most beautiful caves in Ha Long

If you have traveled to Halong you’re surely fascinated by the magnificent beauty of Halong Bay. Famous for beautiful and unique caves, Halong becomes the popular tourist destination and was chosen as an ideal  place for trekking tours, sightseeing, recreation, and swimming. Each cave in Halong bay carries a special name which will awaken the travelers curious to discover the mysterious beauty, sparkling at every sight and attraction of these caves. Let make a tour to discover Halong famous caves to see the spectacular and massive of a world natural wonder.

Situated in the tourist center of Ha Long Bay, on the Bo Hon Island, Sung Sot cave is the largest and most beautiful cave of Ha Long bay where collected the magnificent Stalagmites and Stalactites in specially shaped that you could not find anywhere.  The way lead to Sung Sot Cave stay under the foliage, steep by steep  up by stone stair, tourists not only get the feeling of climbing the mountain but also eagerly like walking into heaven. 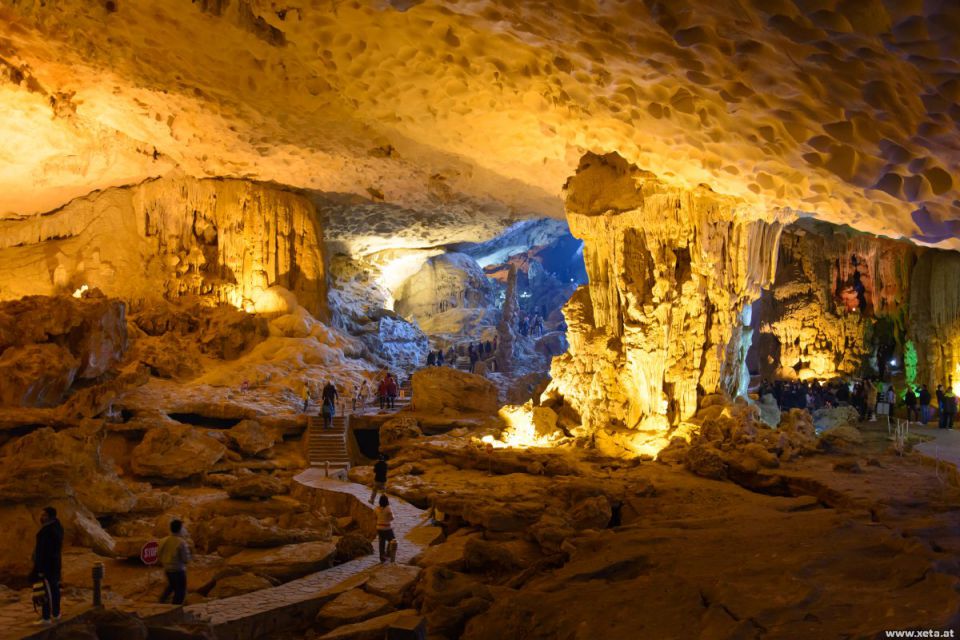 Why is it called the Virgin Cave ?The name associated with the legends about a pathetic love story. The first impression when entering the cave is the imagine of a young woman stone statue , lying with loose long hair, eyes facing the sea, the eyes evokes a sadness as in wait for something but despairingly. 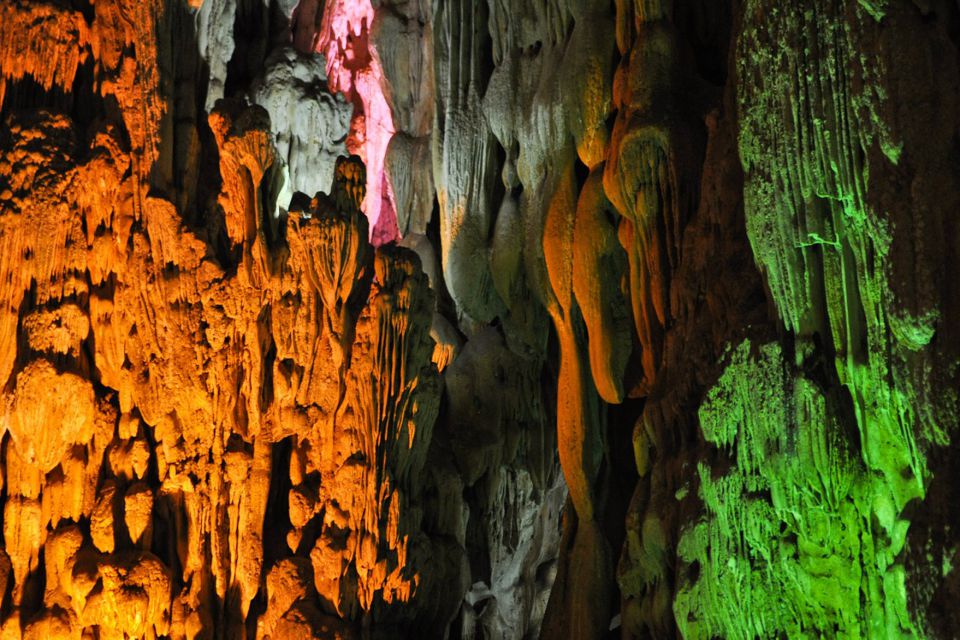 Situated opposite the Virgin Cave, this cave as a statute of a petrified man face turned to Virgin Cave.

According to ancient legend: One upon a time, there is a beautiful girl living in a Fishing village, but her family very poor, they must working for the lord of the fishing zone. The lord saw her beauty and he forced her family to let him marry her as his concubine. But she refused because she had a lover and he went fishing far on the sea to earn money to prepare for their wedding day. Before her indomitable heart, the landlords can not oblige her so he decided to take her to a desert island without people living,  she was starving and exhausted. On a rainy night, she was petrified here. And that was the night her man know that she had an accident, he hurry rowing a boat to find her on a stormy night, his boat was shattered then he was drafted on a desert island, in lightning he saw and recognized his lover, he try to call her but the strong wind carries his voice away. He used a stone knock to the cliff to let her know that he had arrived. He knocked until blood flowed profusely on his hand until he was exhausted and petrified in the Trong cave.

Visit Trong cave visitors will avidly listen to the legend of this cave and many other legends about Halong bay. That why the local people in Halong considered Virgin Cave and Trong cave as a symbol of love, a place for the couple vowed for love. And today, whenever the cruise crosses over here, if you listen carefully you’ll hear the dolorous cries of the man resounded around. 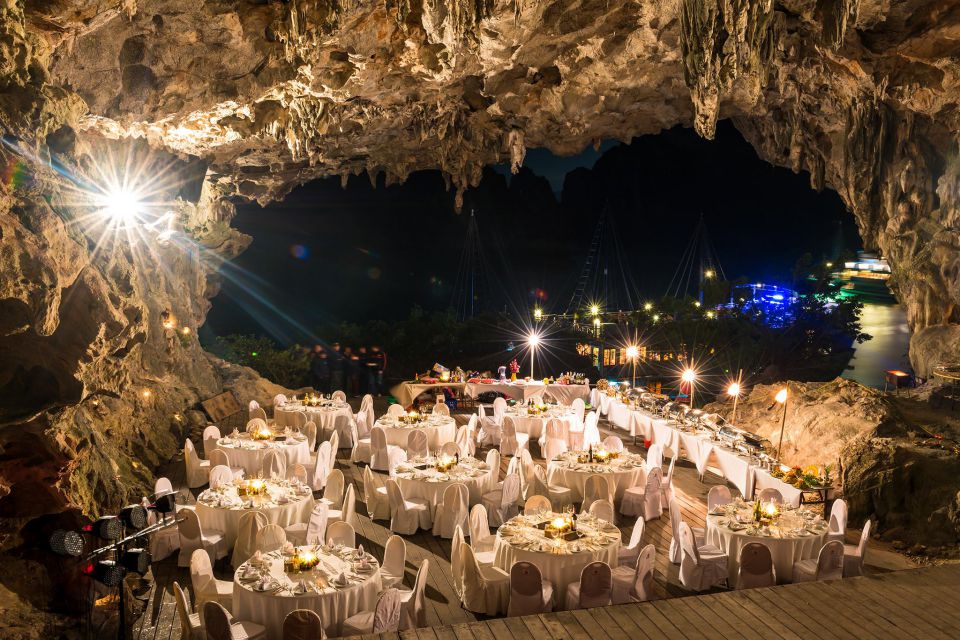 Belonging to the beautiful Cong Do island, Thien Canh Son cave is one of the most attractions of Bai Tu Long bay and Halong Bay. This cave also shows up the unique and magical beauty of Bai Tu Long Bay. The pathway to Thien Canh Son is set below the forest canopy and a stone cliff, therefore tourists will have the feeling like climbing towards the heaven.

All creates a lively picture of heaven or a secretive fairy land. In the evening, you may have a memorable dinner in the cave on candle- light with your family or friends. Or this is a great idea if you’re looking for a quixotic place for your cherished proposal. 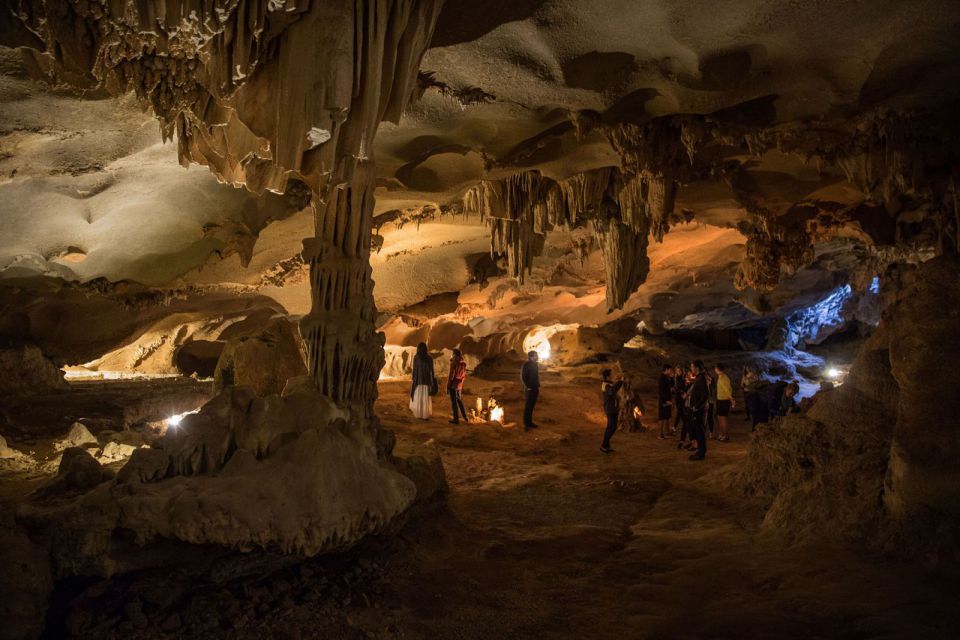 With approximately 5000m2 of width, Dau Go caves situated at a height of 27m over the sea level, the cave is a complex of concentration ancient architecture exuding the ancient beauty, wild and mysterious of stone columns, small stalagmites, rising as if to get to the sky. 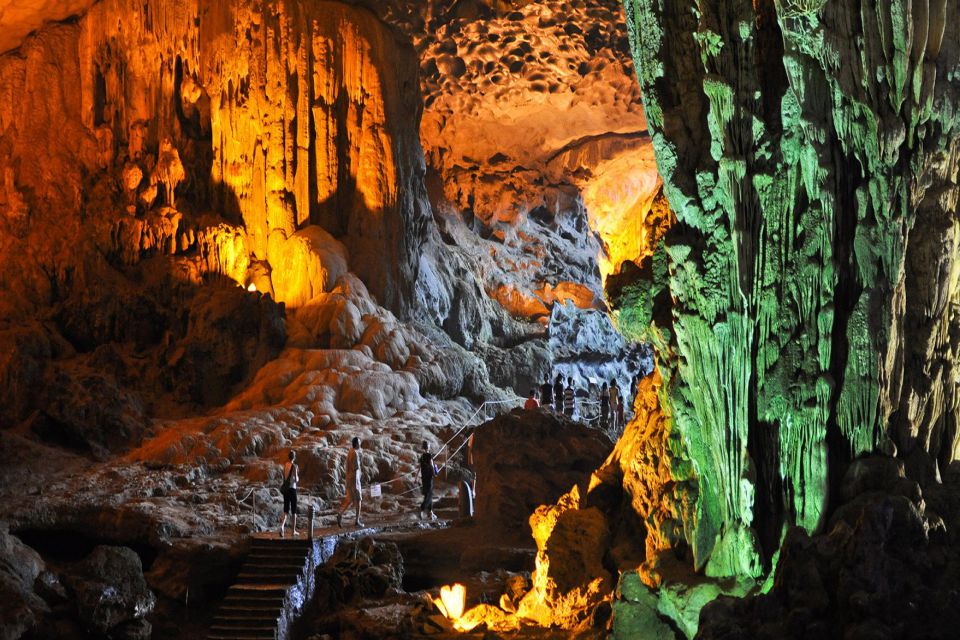 This is one of the most beautiful caves in the caves system of Ha Long Bay, located in the southwest of the bay, Thien Cung has a stunning scenery, lively from outside to inside. Way to the cave with the erect cliff, lush vegetation covered  the wayside, the more you get deep inside the amazed vivid beauty and splendor appeared in your eyes, even when all of the scenery appear in your eyes you will feel the endless beauty of the cave. 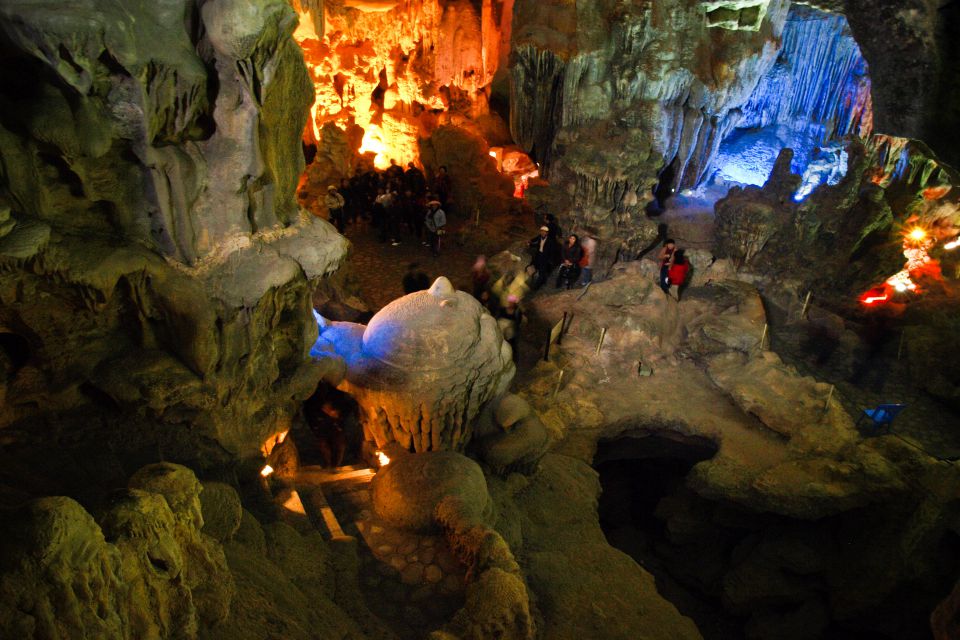 Located on the Dam Nam island, where the mount peak gets to 187 meters, covered by the Dam Bac island in the northern and the rear is Soi Sim islands. The cave length is about 100m has a small road leading to the top  here water murmuring all four seasons, stalactites are formed from the cave ceiling and decumbent like a beautiful curtain. 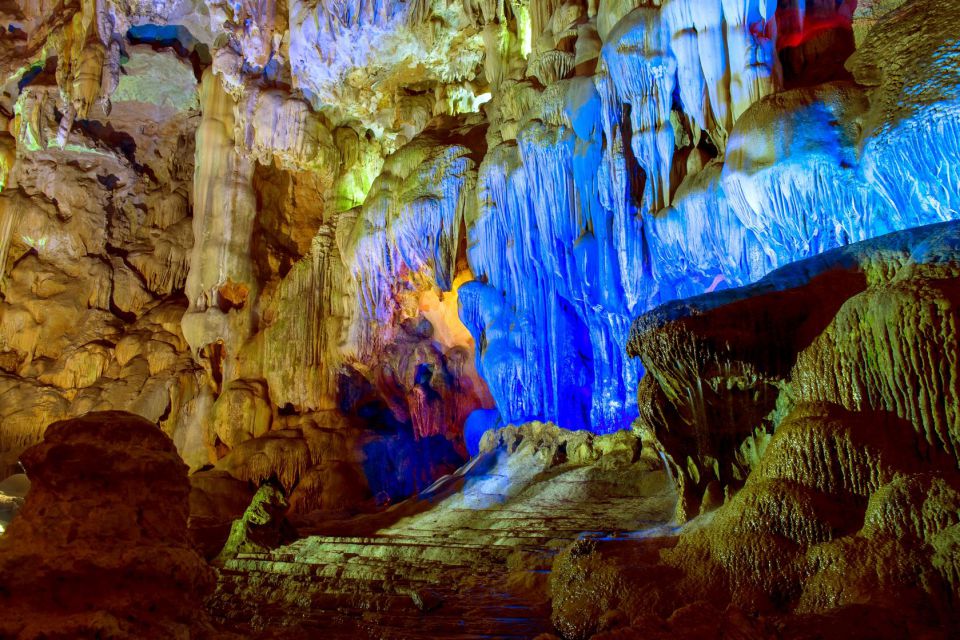 Away from Ti Top beach 2 km to the southwest, The Maze cave is situated on the Lom Bo island at a height of 25m over the sea level. Upon entering the cave, visitors are entering a great palace of a Persian emperor while the murmuring sound makes guests think about the voice  of Searat telling the story “thousand and one nights” for her monarch.

There are many other caves in Halong bay waiting for traveler explorer . Each of them consists inside not only the beauty of scenery but also the historic and legend story together with the geography value will enamor anyone who put their step inside. 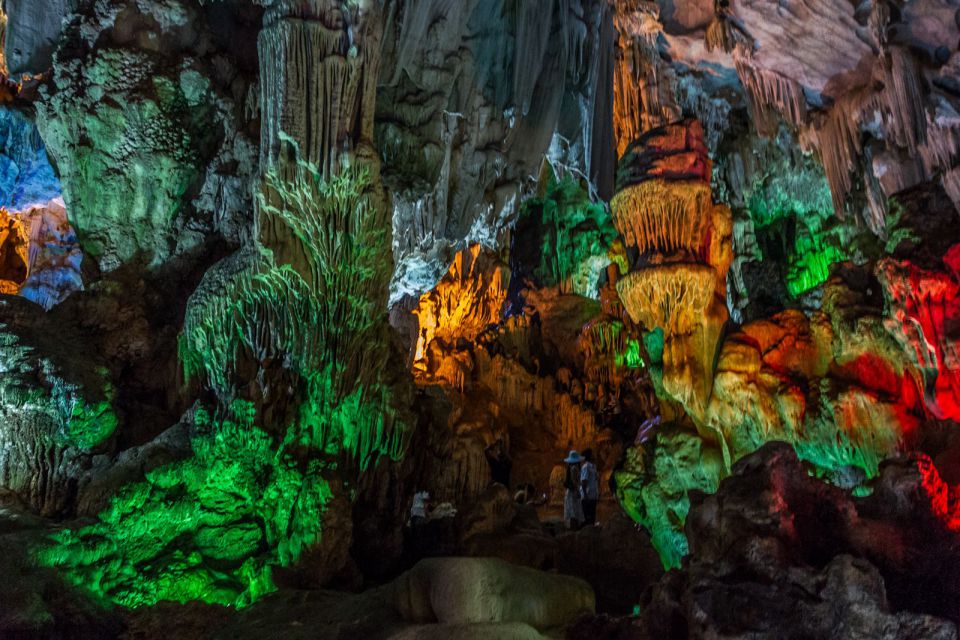 In addition, To enjoy the most beautiful sightseeings in Vietnam by your eyes, you can see some itineraries below Halong Bay Cruises – Hanoi Tour – Vietnam Tours – Sapa Tours – Package Tours or book a private car to discover where ever you want to enjoy the Vietnamese taste.